There are about 5.9 million reasons why one should never be explicit on a blog.    Once you hit the proper button, these tomes become public  domain for the world to read and pilfer.   Perhaps, the ruthless sorts in the literate world can take this info and use it against you later on.    Though in my case, I’m really not sure what how that would be applicable.

Running for public office is NOT in my future and let’s say for one insane second, that an ambitious wild hair to run somehow took up residence in my ass and put me on that path–even then I would be pretty damn honest about my past which admittedly, has  had a few unsavory and untoward moments.  Nothing illegal mind you; these are things that would most definitely get me grounded for months.

That leads me to believe that this Arkansas bred “poli-playuh” ate his weight in pot laced brownies.    There could be no other explanation outside of downing  THC capsules.  OK, so he may never have inhaled, but the cat obviously swallowed;   a verb that would come to mean something entirely different in the second half of his second term in High Office.

You see kids, I have danced on the bottom rung of the show business ladder.  Being on local and regional radio and TV can give your name some semblance of  public recognition.   For example, I worked on a very, very, very popular male oriented morning show in Houston.   We worked blue and admittedly, we were funny.   Our audience covered a wide array of people…from white collar to no collar.   From lawyers to the lawless with the latter being the far more audacious.

At a remote broadcast,  I was approached by this man who asked me to sign his penis.   Yep…wanted my signature on his penis.    As the only female on an 11 member morning show, you learn very early on to think quickly.   He lowered the front of his pants to the appropriate length,  displaying what God and his parents’ combined DNA had given him.   I thought to myself, if this asshole wants to be inappropriate, I’ll play.

I looked down at his member and told him and the crowd surrounding us that I’d be happy to sign it (and thinking this would completely defuse the situation through abject humiliation), but based on the size, only my initials would suffice.

But beyond that,  I was never overtly narcissistic in thinking that I could sit down in front of the camera or crack a microphone and say something pithy that could alter the course of someone’s existence.   But I was certain if I could entertain  my audience to any degree;  if I could make them chuckle, then I could at least, perhaps, maybe  alter someone’s mood and that in and of itself, is win/win.

I also noticed that if I was brutally honest and went public with a few  thigns…not everything,  but a few things; issues with which I had struggled, then others could relate and they’d call in to the show and an open and honest dialog would ensue.

Discussion leads to détente which leads to the breaking down of barriers and understanding which in turn, leads to healing.

And/or years of psychotherapy.

What all of this is leading to is the fact that this coming April, I will turn 52 and even though I’m still a great piece, I am  (in what I pray to the Great Shiva Goddess) experiencing the last vestiges of menopause.

That is my personal revelation.

I can handle the free range periods.   You know, the ones that go and come when and where they want to.   That’s not so bad, but the hot flashes are.   Many women have attempted to write about this period in their lives with a Bombeckian approach.  I loved Erma too, but I don’t think even this esteemed lifestyle humorist ever quite hit the proverbial nail on the head when it came to fully describing menopause.

I don’t know if I can do any better, but considering I’m in the throes of  one mother of a hot flash even as I type, I will do my best.

It is as if Satan himself has crawled inside me and after an afternoon of eating fetid cheese, pig knuckles and Habanero chilis, decided to light his farts with a blow torch.

My body stays in a constant state of thermogenesis.  I am a blast furnace and I radiate heat.   People standing by me can actually feel the radiation in all directions.   Plus, my hot flashes are fever inducing.  Not only that,  I have been forced to become painfully aware of sweat glands in parts of my body that ordinarily, don’t sweat…like toenails, teeth and moles.

I have been told by my sister, Karol and other women who have born the heat and treaded this schvitzy path that the end is almost near.

Fine.  Groovy.  I’m OK with endings–this one especially.   And I really don’t care that  my cessation of menstruation brings with it a new title:  crone.    Sure as hell trumps ingenue and to be honest,  I almost feel honored to be allowed into the sorority. I will consider myself better for the wear and certainly more wizened by the experience.

To hammer home that point, I recently cleaned out my bathroom closet where I came face to face with reality…..and boxes of personal items t 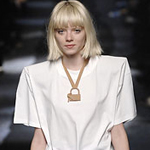 hat once so aptly represented fertility and maidenhood.    Now, I could say goodbye to these once vital items and toss them out,  but I was raised by two parents who were raised during The Great Depression.   Because of this, I’ve had “waste not, want not”  engrained in my psyche.

It was time to get creative.

That said, three tampons now level out the uneven feet attached to the wrought iron legs of my dining  table out on my patio and two boxes of extra long Kotex will no doubt help me, Laurie Kendrick, singlehandedly bring back the wonderfully flattering 80’s  fashion look of big shoulder pads.