And I flipped some self-involved, “my car is better than yours” idiot in a Mercedes the “banan” in Houston traffic today.

But that’s not why blog.   No today, this post focuses on the glorious banana.

Here’s how this rant got started.   You see, I’m seriously contemplating thinking about the possibility of maybe getting in shape and  by that I mean both  my innards AND my outtards.    A health zealot  I know, who shakes her head every time she sees me and my corpulence,  was thrilled at the prospect of my venturing into a life without potatoes, bread and Cokes.   She suggested that a banana was  in fact, a miracle fruit for getting in and staying in shape.

“Oh really???”, I questioned mockingly as this now49-year old’s tiny bits of arm flab moved independently of the rest of her body.

Then my attitude changed when I literally got winded rising up from my chair.  Amd then, at lunch I was walking out to my car and thought I was being followed very closely, by a large, menacing man.   Turns out…it was my own ass.   Yes, I AM getting in shape.

So, I decided to investigate Thin Woman’s claims about the banana.  Now, I don’t eat them unless their mashed in a desert bread or in a split holding three scoops of ice cream or part of a smoothie.   So, I plead banana ignorance, but fully intend school myself in its ways and means. 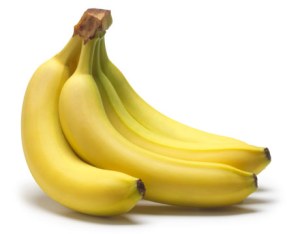 For starters, the title of this post might be correct.  There is speculation that the word banana comes from the Arabic word “banan” which means finger.  I mean, it makes total sense.  See?

But from what I’m reading, the true origin of the bananas can be traced  to Malaysia.   They travelled from there to India where they’re mentioned the Buddhist Pali writings dating back to the 6th century BCE.   In his campaign in India in 327 BCE, Alexander the Great fell in love with the taste of the lowly banana.  He’s credited with introducingt them to the  Western world.

Eventually, bananas reached Madagascar, an island off the southeastern coast of Africa. Beginning in 650 CE Islamic warriors traveled into Africa and were actively engaged in the slave trade. Along with the thriving business in slave trading, the Arabs were successful in trading ivory along with abundant crops of bananas. Then the damn things spread westward.

Interesting note:  the bananas that grew in Africa and Southeast Asia weren’t the big, hulking  eight-to-twelve-inchers that we have here in Modern America.   Centuries ago, they were small,  about as  long as a man’s finger. Ergo the name banan–Arabic for finger. The Spaniards, who saw a similarity to the plane tree that grows in Spain, gave the plantain its Spanish name, platano.  See the connection now?

It was almost 350 years later that Americans tasted their first banana. Wrapped in tin foil, bananas were sold for 10 cents each at a celebration held in Pennsylvania in 1876 to commemorate the hundredth anniversary of the Declaration of Independence. Instructions on how to eat a banana appeared in the Domestic Cyclopaedia of Practical Information: “Bananas are eaten raw, either alone or cut in slices with sugar and cream, or wine and orange juice. They are also roasted, fried or boiled, and are made into fritters, preserves, and marmalades.” 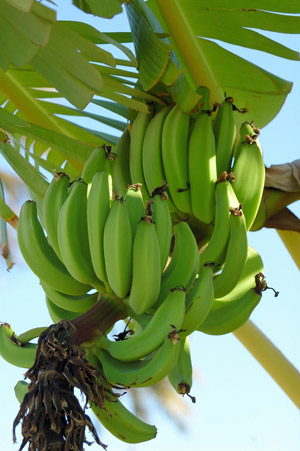 Oh and by the way, the banana plant is not a tree. It’s actually the world’s largest herb.

The banana plant doesn’t have a wooden trunk, even though it can reach a height of 40 feet. The base of the leaves overlap and intertwine in such a way as to form a strong column that supports the plant and eventually its fruit. At the end of each season, the plant dies all the way back to the roots and must begin again almost from scratch.

The love rich soil, a subtropical environment and to grow in bunches.  Pun intended.  They like living in groves with other banana plants..or trees.  Whatever.

YES, WE HAVE BANANA VARIETIES

I had NO idea there are three versions of the banana.

Cavendish is the variety that produces large heavy bunches.  These are the ones  with which most of us  ‘Mericans are familiar.

Lady Fingers are very tall and slender plants and have sweeter fruit  and are smaller in size.

Plantains are cooking bananas. They are drier and more starchy and not as sweet. You use them green like you would use potatoes, and they taste similar.

FACT:  80% of all bananas grown in the world are plantain varieties! They are an important staple food in many tropical countries.

Bananas are rich in Vitamin B6 and they’re a good source of fiber, vitamin C, magnesium and potassium. Lack of B6 in a diet can cause weakness, irritability and insomnia. The potassium found in bananas helps to regulate blood pressure and may reduce the risk of high blood pressure and stroke. Potassium is also essential for helping muscles to contract properly during exercise and reduces cramping up. A medium-sized banana provides 400 mg of potassium -11% of daily value and contains 110 calories and  four grams of fiber. Bananas also contain plenty of carbohydrates which are the body’s main source of energy.    Because of their great taste, they can also serve as a substitute for sweets and satisfy sugar cravings.

Research also shows that serotonin and norepinephrine in bananas may naturally help sufferers overcome depression. They are the good mood food.  Their convenience and nutritional value make them a good post-exercise snack. During long exercises your body lose vitamins and minerals and a banana replaces these nutrients as well as giving you the energy you need.

Bananas are good for babies, too. They are in fact often the first solid given to infants. Bananas are easy to digest because they have no fat and very few babies are allergic to bananas. They are also one of children’s favorite snack because of their taste and they meet the energy needs of the growing children.

EAT BANANAS IF YOU  HAVE:

Anemia: High in iron, bananas can stimulate the production of haemoglobin in the blood and so helps in cases of anaemia.

Blood Pressure: This unique tropical fruit is extremely high in potassium yet low in salt, making it the perfect food for helping to beat blood pressure. So much so, the US Food and Drug Administration has just allowed the banana industry to make official claims for the fruit’s ability to reduce the risk of blood pressure and stroke.

Brain Power: 200 students at an English school were helped through their exams this year by eating bananas at breakfast, break and lunch in a bid to boost their brain power. Research has shown that the potassium-packed fruit can assist learning by making pupils more alert.

Constipation: High in fibre, including bananas in the diet can help restore normal bowel action, helping to overcome the problem without resorting to laxatives.

Depression: According to a recent survey undertaken by MIND amongst people suffering from depression, many felt much better after eating a banana. This is because bananas contain tryptophan, a type of protein that the body converts into serotonin – known to make you relax, improve your mood and generally make you feel happier.

Hangovers: One of the quickest ways of curing a hangover is to make a banana milkshake, sweetened with honey. The banana calms the stomach and, with the help of the honey, builds up depleted blood sugar levels, while the milk soothes and re-hydrates your system.

Heartburn: Bananas have a natural antacid effect in the body so if you suffer from heart-burn, try eating a banana for soothing relief.

Mosquito bites: Before reaching for the insect bite cream, try rubbing the affected area with the inside of a banana skin. Many people find it amazingly successful at reducing swelling and irritation.

Nerves: Bananas are high in B vitamins that help calm the nervous system.

Overweight and at work? Studies at the Institute of Psychology in Austria found pressure at work leads to gorging on comfort food like chocolate and crisps. Looking at 5,000 hospital patients, researchers found the most obese were more likely to be in high-pressure jobs. The report concluded that, to avoid panic-induced food cravings, we need to control our blood sugar levels by snacking on high carbohydrate foods (such as bananas) every two hours to keep levels steady.

PMS: Forget the pills – eat a banana. The vitamin B6 it contains regulates blood glucose levels, which can affect your mood.

Smoking: Bananas can also help people trying to give up smoking, as the high levels of Vitamin C, A1, B6, B12 they contain, as well as the potassium and magnesium found in them, help the body recover from the effects of nicotine withdrawal.

Stress: Potassium is a vital mineral, which helps normalise the heartbeat, sends oxygen to the brain and regulates your body’s water-balance. When we are stressed, our metabolic rate rises, thereby reducing our potassium levels. These can be re-balanced with the help of a high-potassium banana snack.

Strokes: According to research in “The New England Journal of Medicine”eating bananas as part of a regular diet can cut the risk of death by strokes by as much as 40%!

Temperature control: Many other cultures see bananas as a “cooling” fruit that can lower both the physical and emotional temperature of expectant mothers. In Thailand, for example, pregnant women eat bananas to ensure their baby is born with a cool temperature.

Ulcers: The banana is used as the dietary food against intestinal disorders because of its soft texture and smoothness. It is the only raw fruit that can be eaten without distress in over-chronic ulcer cases. It also neutralises over-acidity and reduces irritation by coating the lining of the stomach.

Warts: Those keen on natural alternatives swear that, if you want to kill off a wart, take a piece of banana skin and place it on the wart, with the yellow side out. Carefully hold the skin in place with a plaster or surgical tape!

I also hear in a pinch, it can help give a shoe a mean shine.   Take the gummy, stringy inside of the banana skin and rub it directly on the shoe; polish with dry cloth.   Sure you’ll smell like funny and gnats, flies, Chilean Fruit bats and the occasional far-sighted, but hungry monkey will want to eat your lower extremities.  If so, witnessing that would be an amazing feat.

Or amazing feet.  Not sure which. 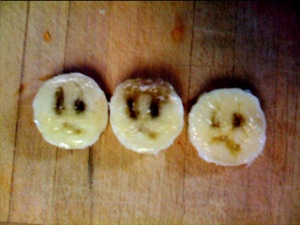 And now, you may opine your ass off...

This site uses Akismet to reduce spam. Learn how your comment data is processed.