Yeah, you read that right.   Obama IS our first Irish president, at least in this century and yes, the impecable brain trust here at Laurie Industries can prove it.

I woke up early this morning, my brown eyes just a shade greener because of the holiday.  ‘Tis St. Patrick’s Day–that’s when some big Irish guy with a snake phobia, carried this large staff or stick or maybe it was a flute, then drove all the British out of Scottish bars or something.    Not sure.  I’m not exactly up on my Emerald Isle history or lore.   But because it’s the day of green beer and shamrocks, I thought today would be the perfect day to prove that President Obama is Irish..

We did some digging and found proof and photos.

Exactly 109 years ago, his great, great, great, great grandfather boarded a ship and sailed from Ireland to New York City. He disembarked at Ellis Island with countless other immigrants all seeking the legendary American dream. As he was being processed, a desk clerk accidentally omitted the vital, ethnocentric apostrophe in his last name.

Fortunately for Barack, he is of Black Irish descent—a traditional term believed to have originated in the U.S. that commonly ascribes to a dark brown or black hair phenotype appearing in Caucasians of Irish ancestry. This can be distinguished in contrast to the (lighter) brown, blond or red hair color variant, the latter stereotypically perceived to personify the look of typical Irish folk.

So, with extra melanin in his corner, Obama has been able to successfully “play up” this fact throughout his political career and when he won the presidential election in November of ’08, he became the first African American to move into the Oval Office.

Great.  We love it.  Cool.   This is America.  Opportunity for everyone and to the winner the spoils.

However, we feel he has been disingenuous and thusly, has become an incredibly opportunistic politician since he used his Black Irich ancestry to garner votes and carve a place for himself in history.

And yes, as I mentioned,  we have photographic evidence that he’s Irish.  He certainly loved to dress the part as you can plainly see in this photo which was taken while moonlighting as a cabdriver during the St. Patrick’s Day celebration in Chicago, 1994. 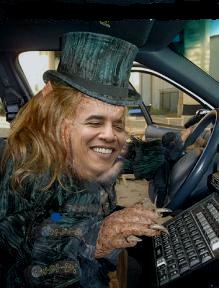 Obviously, he has smoker’s fingernails.

And then there’s this photo which not only substantiates our claims that Obama is in fact Irish, but suggest that maybe,  he just might…at the very least, also have an abject appreciation of the a particular “alternative lifestyle”. 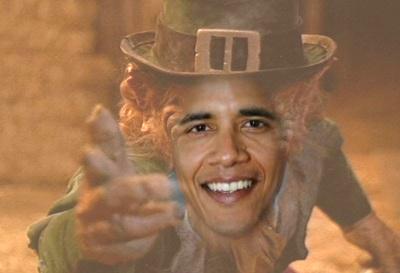 Is any of this true? Who’s to say, but we here at Laurie Industries encourage individuality and respect for the authentic self.

So Barack, whether you’re a son of Dublin or Kenya, we beg you, don’t deny who and what you are, whatever that is.

And now, you may opine your ass off... Cancel reply

This site uses Akismet to reduce spam. Learn how your comment data is processed.